Why I Leaked the XB1M13 Agreement

Edit: Please view the UPDATE near the bottom of this post!

Microsoft recently began another YouTube advertisement campaign in which they pay Machinima partners bonus CPM to say good things about Xbox One.

I say "another" because they did it back in November, too, but no one really said anything about it back then for some reason. 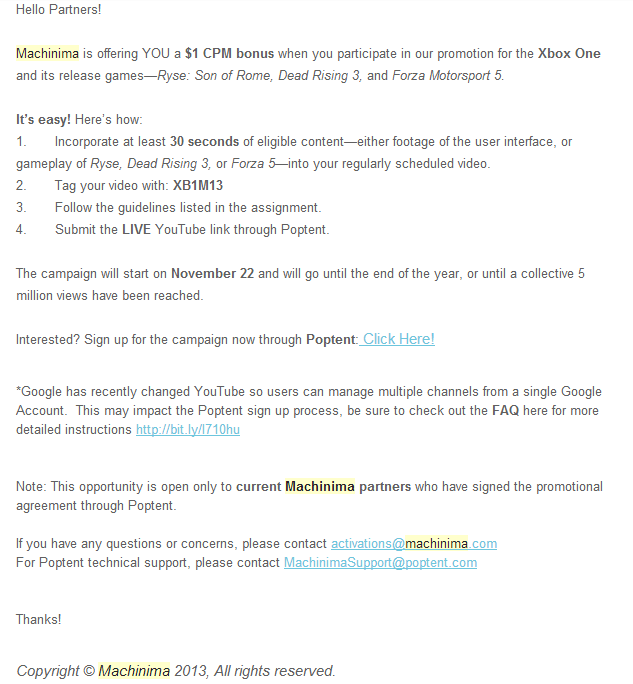 What's interesting here is that E3, PAX and Comic-Con have all done similar advertisement campaigns through Machinima. 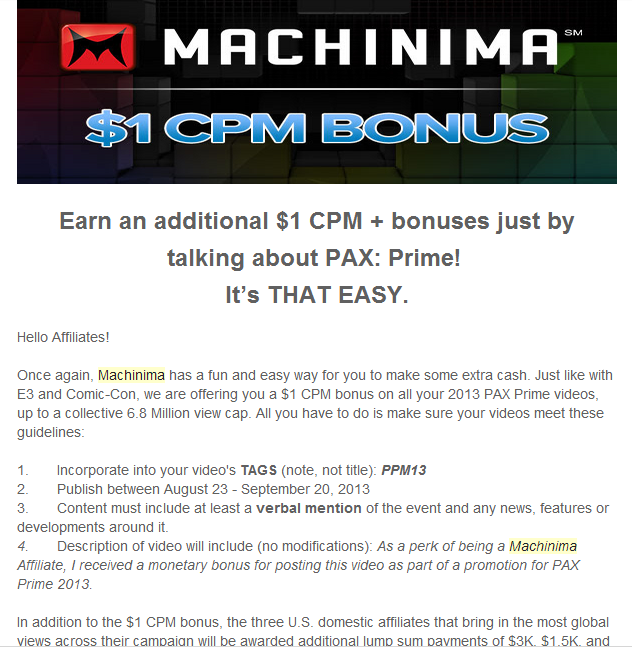 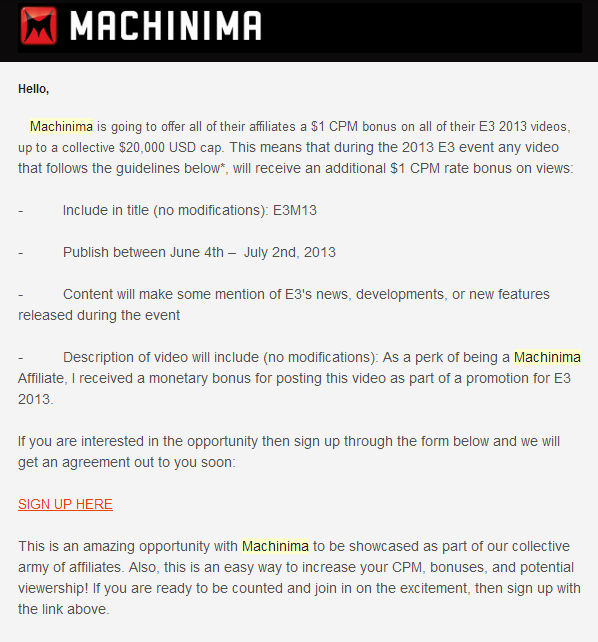 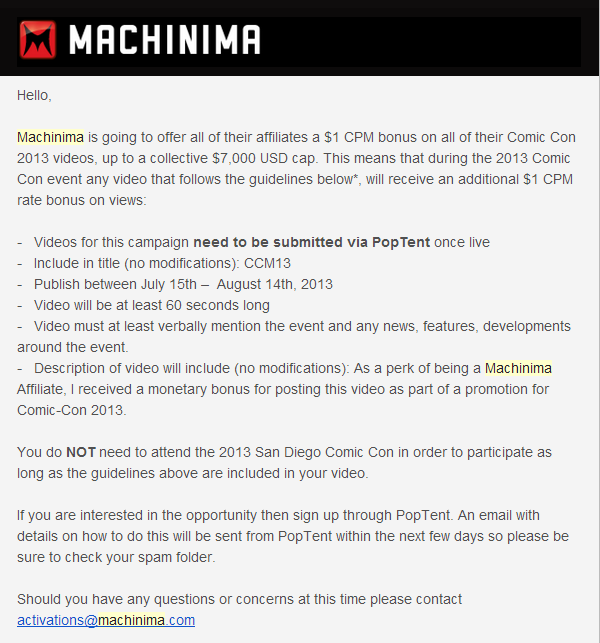 So are we supposed to boycott E3, PAX and Comic-Con now, or what? I don't think so. The issue isn't that these campaigns exist, it's the language specifically mentioned in the XB1M13 campaign in regards to not being able to speak disparagingly about what you're playing. It leaves the door open to being paid for saying you like something you don't, and that, friends, just ain't right.

I was the one who posted the XB1M13 agreement to Pastebin, seen here. Next thing I know, a shit ton of gaming news outlets are reporting on it, including:

And who knows how many others. Most of them link to the Pastebin that I uploaded.

Yes, it was me. I originally posted it in this GameFAQs thread, in response to this NeoGAF post.

I did not think it would blow up like it did.

I posted it to bring to light the idea of a campaign tag -- what it is and why it's important to note that it's there. I did see the language in the contract and found it suspicious, but my understanding of FTC guidelines at the time was not that great. I just thought it was unethical, not exactly illegal, but unethical. Of the thousands of videos out there with the XB1M13 campaign tag, most of them haven't even signed the agreement and are not making any bonus CPM.

Check out this screenshot from Poptent: 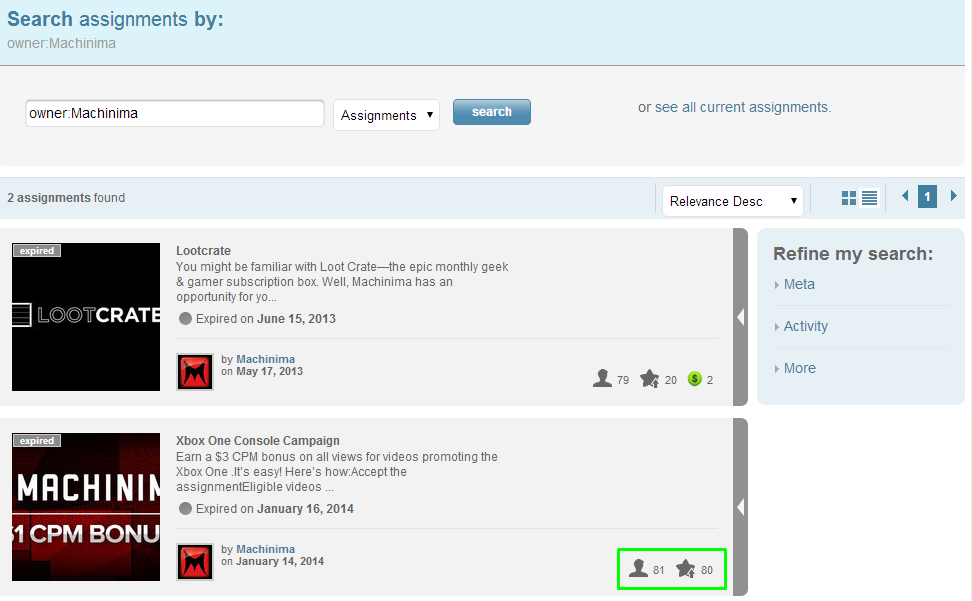 Point is, I posted the agreement for the internet to see with the best of intentions. I wanted people to understand the significance of the campaign tag in these type of YouTube ad campaigns that will surely become more and more popular as time goes on. I thought that would be the overall focus, but instead, the focus became the language of the contract, which I noticed, and thought was rather shady, but, again, did not think was illegal.

I hope that Machinima modifies their agreement to state that the YouTuber must verbally state in their video that they're part of an ad campaign. That's what people want, and that's how it should be, anyway. I'm not saying it shouldn't be that way. I'm just saying that the campaign tag is there for a reason and people should become accustomed to it because these type of ad campaigns aren't going away (UPDATE: or maybe they are).

I also hope that I'm not in any legal trouble. I've been sitting here, somewhat paranoid since all this has gone viral, a bit worried that my phone is going to ring and some Microsoft guy is gonna be all pissed off at me. I love Microsoft -- grew up on Windows and Halo is one of my all-time favorite franchises, not to mention Xbox 360 pretty much saved my life in Iraq -- and I never meant any harm. I was really just trying to spread the word on campaign tags and bring to light the unethical language of the contract. It should be noted that Microsoft's advertising agency, Starcom MediaVest Group, are the ones who worked with Machinima on this. It's not like Phil Spencer drafted it and was like, "Yeah, let's do this, it'll be fine."

I guess that's all I've got to say about the situation. Thanks for reading.

On 2 September 2015, the FTC announced their ruling on the matter.

"The order settling the FTC’s charges prohibits Machinima from misrepresenting in any influencer campaign that the endorser is an independent user of the product or service being promoted. Among other things, it also requires the company to prominently disclose any material connection between the endorser and the advertiser, and prohibits Machinima from compensating any influencer who has not made the required disclosures. In addition, it requires the company to follow up within 90 days of the start of a campaign to ensure the disclosures are still being made.

FTC staff also has sent a letter to Microsoft and Starcom closing its investigation into the two companies in this case. According to the letter, while Microsoft and Starcom both were responsible for the influencers’ failure to disclose their material connection to the companies, Commission staff considered the fact that these appeared to be isolated incidents that occurred in spite of, and not in the absence of, policies and procedures designed to prevent such lapses. The companies also quickly required Machinima to remedy the situation after they learned that Machinima was paying influencers without making the necessary disclosures."


In short: Microsoft and Starcom MediaVest Group had existing policies that Machinima ignored. The FTC found that Microsoft acted swiftly to remedy the situation once the problems were uncovered. Machinima is prohibited from paying influencers who do not disclose that they're part of a paid promotion and more specific details about the nature of the paid promotion must be made VERY CLEARLY within the paid promotion.